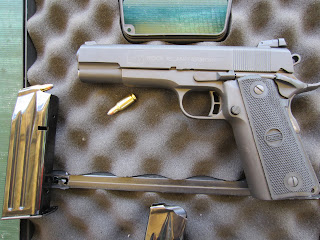 On my recent trip to the Armscor Firing Range at the basement level of the Makati Cinema Square, I was delighted to find the Rock Island Armory .22 TCM pistol already being sold.

I'm excited about this thing. And so is American Handgunner. 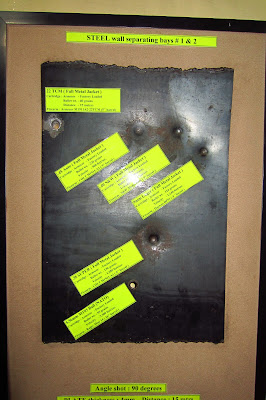 The .22 TCM weighs only 40 grains but can travel over 2000 feet per second. Pretty impressive numbers for a tiny little package.

Check out this framed 4mm steel plate that shows the effect of various types of ammunition that were tested against it.

This is the same steel that protects each shooting bay. As you could see, only the 5.56 caliber bullet fired from a Ruger Mini-14 and the .22 TCM were able to penetrate.

A pistol round doing what a rifle bullet does? Holey moley.

When I tried it out a few months ago at the Bolo Cup tournament in the ARMSCOR FIRING RANGE in Marikina City, I was just amazed at how fun it was to shoot. I felt hardly any recoil and it was very accurate. It did things to a watermelon that would put a .45 to shame.

Can someone please send a few samples to that truly awesome gentleman at The Box 'O Truth so we can see how it works against water jugs & denim, drywall, door locks, car doors, and other cool stuff? 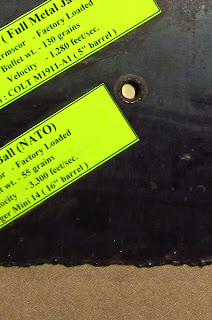 I'm a bit worried worried about how this would perform in a personal defense scenario.  Over-penetration endangers you family members in your home, and also your next-door neighbors. You are responsible for all your shots, even if it passes through your target and into someone else!

Now imagine if someone would develop a submachinegun using the .22 TCM that would hold 30-100 rounds in its magazine. I'd say it would be a fantastic zombie-killer. 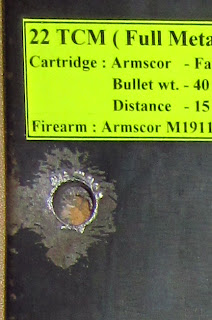