In Part I of our Home Defense Analysis, we examined how we could fortify the interior of our homes in case TSHTF with nifty help from Floorplanner.com.  With that essential first step, we have learned how to identify a few critical areas that could turn our home into a castle.
In this segment we complete the picture by integrating other survival strategies to be ready for the worst-case scenario: The Siege.
The Situation:
Your group has kept a low profile for a long time since the outbreak.  Your home's defenses have been hardened & have stocked up on renewable sources of sustenance.  Things were going well until hordes of walking dead began moving through your neighborhood. Your family knows how lay low, early preparedness & vigilance have seen to that.  However one of your neighbors have somehow managed to attract the attention of a big group which are now attacking their home.  To your horror, they detect your presence despite everything you've done.   They are at the gates...


If you've done your homework, entry points would be barricaded, weaknesses have been corrected, defensible areas created, and you've also prepared multiple emergency exits that lead to safety.  Take note of the SUV that's wonderful at blocking gates.  You won't need it in a major outbreak.  The wiser choice would be to travel noiselessly by foot or bicycle to your next safe houses.
The Problem Grows
Most people assume that a perimeter wall and lots of guns will do.   I've got a tall one made of cement & the front's got sturdy iron bars.  Mrs. Zombie Hunter is pleased because of the quality workmanship.  Unfortunately, this will not be enough.  Once they've detected you, the horde will pull at your gates endlessly and the metal will give way after a few hours.  They don't tire, sleep, or pause for breaks.  Use this time to make final defensive measures. 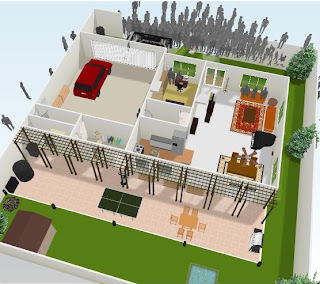 once they've detected you, they won't go away
Hard Choices
At some point you will need to take action.  You need to assess the situation to decide if your defenses will hold or not.  If they will not, mostly because of ever-increasing numbers, your family must be prepared to escape.   Getting trapped only means delaying the inevitable. If you're trapped, you're dead. Don't ever get trap.  Remember that the fear of change and the unfamiliar can be too much for some of you. Time is life, act before its too late!
For step 3 to work, you need to keep the undead from entering your home long enough to get your family ready.  Yeah yeah, this is when we start shooting those undead bitches.

Enemy at the Gates
Have your shooters quickly assemble at pre-designated firing positions.  The goal is to slow them down long enough for your family to get their stuff ready.  Hopefully you've been able to train your wife and other family members to use firearms proficiently.  The more shooters per household, the better.  Always have at least ONE person going around your home to make sure that the undead have not found an unforeseen weak spot in your defenses. 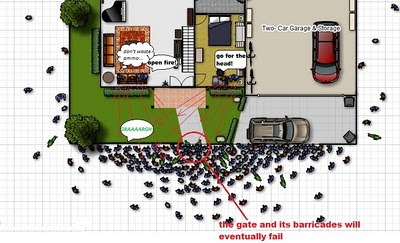 For this scenario, rifles would be best suited because of the distance from the windows to your gates.  Accurate shots to the head from beyond 15 meters will be hard to do with any other weapon.

The ideal firing positions would have a good field of view and have a criss-cross pattern so that your two shooting positions form a kill zone.  This is where the maximum amount of damage can be inflicted at an area where the enemy has been funneled into.  See the above figure to see what I mean.

At this point, your family members should be ready to escape to the emergency exits. 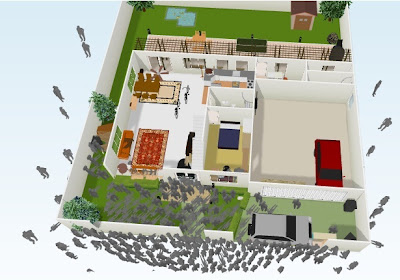 this is it. don't get scared now
The Breakthrough
This will be the most distressing part of the siege. Once they've reached the main doors, shotguns and close range weapons will be effective.  Before they break in, your non-combatants should be already near the exits.  The whole idea is to gather the zombies into one area: the front door.  This is to increase the chance that there will be much fewer undead on the other side.

The interior home defense analysis will play a crucial role here.  You should have identified where the defensible areas are inside.  A properly barricaded staircase can be defended by even a single person with just a handgun & an axe because only a maximum of about two zombies could come up the stairs at a time.  The goal of the people upstairs is to escape through the windows and balcony at the second floor to the rear of the home.

In our example, the kitchen is a natural strong point. Tables and other objects can quickly form an effective barrier.  You can stop a lot of them from here. Once everybody upstairs have moved to the back of the house, the defenders in the kitchen can execute the escape plan. 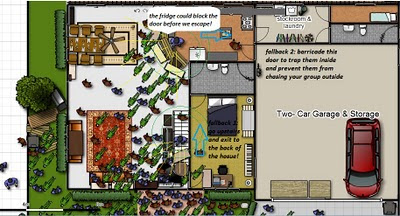 In the picture above, the defenders have drawn the enemy inside and have slowed their movement with well-placed barriers.  Making a stand in these optimal locations can maximize your firepower! 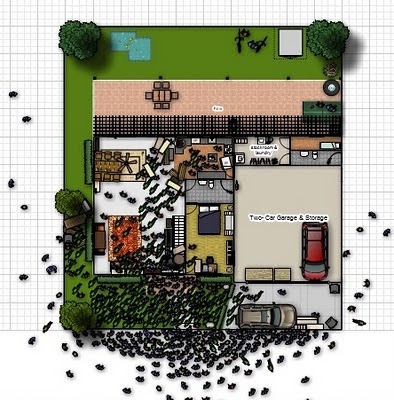 You've been able to get your kids and elderly to the emergency exits.  They've also got their bug out bags & provisions.  The defenders have blocked the kitchen door that leads out with a refrigerator and washing machine.  This is it, time to escape!
Your home is lost but everybody's okay.  If you were paying attention to our previous activities, your family members would be equipped with the special emergency map.  The map also identifies danger-zones to minimize risk during travel.  If properly done, these would be multiple locations that are situated near ideal resource points to keep you well fed & safe for a long time to come. 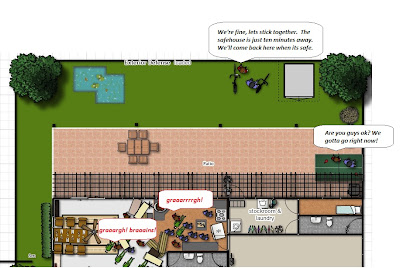 1. If you put all of the previous survival strategies together, you will be able to defend your home and get out alive & stay alive.

2. Don't be lulled into complacency.  Any fortress can be breached.  Always have an escape plan!

3. Vigilance is the first line of defense, preparedness will help you endure.

4. All of this won't mean jack if you don't involve your family.  Teamwork will be the best weapon against the zombie apocalypse!

Stay vigilant! Be prepared!
by The Zombie Hunter at 10:51 PM