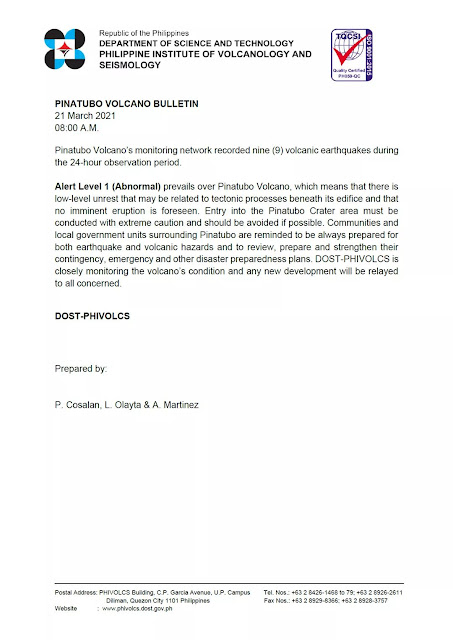 I was in my first year in high-school when it blew up. The most powerful eruption of the entire 20th century.

Stuck at home because my asthma was so bad, I could barely breathe even when locked up in my room. It was a real danger for me for an entire week.

The ashfall covered the entire planet and reduced global temperatures a wee bit.

So yeah, I've got some history with this volcano.

by The Zombie Hunter at 8:05 PM No comments: 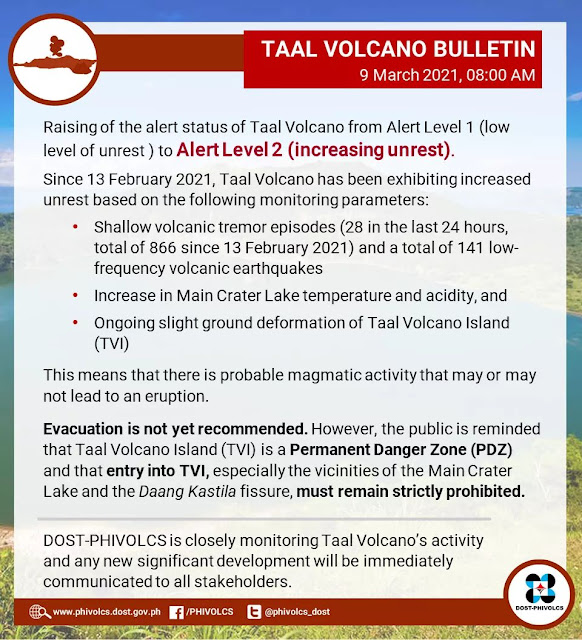 People got stuck in crazy traffic jams trying to escape Cavite and all the affected areas. It was a little desperate because whole families were in their cars trying to get out.

Face masks were used en masse for the first time in decades before the Pandemic.

We sheltered in place before it was fashionable.

People were PANIC BUYING on the day of the calamity. Supermarkets and gas station convenience stores filled with people.

We thought that was the wildest 2020 could get. *rolleyes*

by The Zombie Hunter at 9:42 AM No comments: 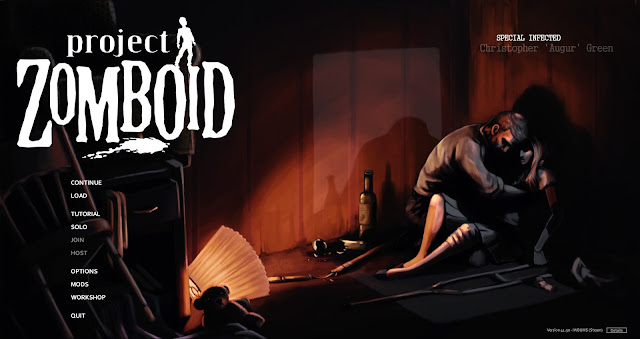 I've been having a terrific time. As of today I have logged a total of two hundred and eighty six (296) hours since getting it last November on Steam for less than ten bucks.

Project Zomboid is a game developed by British and Canadian indie developer Indie Stone. Initially released in April 25, 2011, it has undergone consistent updates over the years.

It runs smoothly on very low-spec machines. My office laptop is an Intel Core i5-6200U 2.8GHZ with 8 GB Ram and the game doesn't put  strain on my NVIDIA GeForce GTX 950M video card even while being chased by a horde of zeds down the street.

I am currently enjoying the public beta of Build 41. A beta, but this version is one of the most fleshed-out survival games I have ever played. Its literally got everything without being overwhelming or tedious.

How did they manage to do that? Read on!

Set in rural Kentucky, you are a lone survivor in a SIMS-stye isometric world filled with zombies. There are no other living people around. It is you against the countless hordes. You'll also have to contend with mother nature, a stomach to feed, and mental well-being. Feels a bit like 2020, doesn't it? 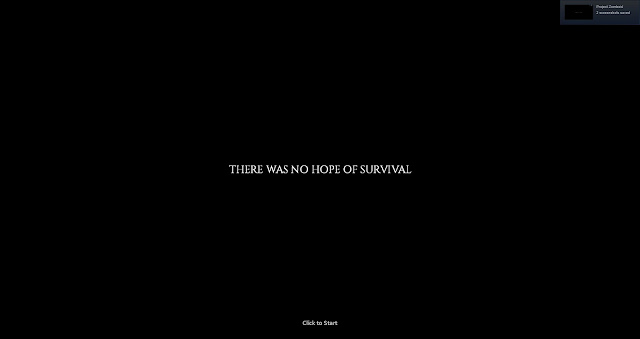 The intro's tone says it all.  The soundtrack is haunting and appropriate. It can linger in your head during the day long after you've closed the game, but not in a bad way.

There is a lot of satisfaction to be had from trying to make your way around the world.

Little victories such as evading a large horde to raid precious supplies down the street. Leveling up a cooking skill so the food you prepare is more nutritious. Hotwiring a car! These can be quite satisfying.

Zombies are dangerous but not terribly so. Hordes however are a different animal. The game is hard, but you can choose how hard it can be. 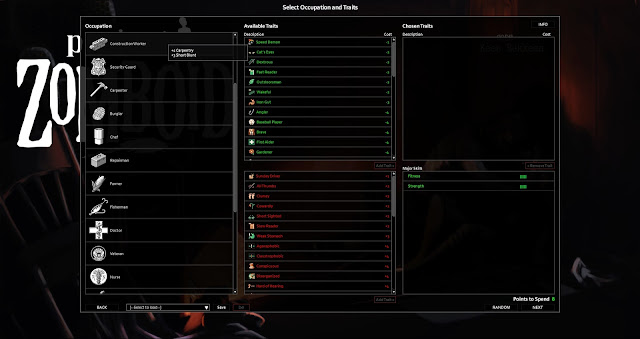 In the creation screen there are options to select from a variety of skin tones, facial features, hair styles, and clothing. You can choose a career to determine what kind of skills to start with. For example, a burger-flipper has the cooking and short blade skill, an auto mechanic can work on vehicles and is handy with short blunt weapons.

There are positive and negative traits to boost your stats. The negative ones like short sightedness reduces your overall seeing distance and peripheral vision (although not in a really big way since I always choose this one) in exchange for a few plus points for your to spend on positive traits.

Things like having a strong gut so you can manage eating spoiled food sounds okay, others give massive boosts in exchange of more points like Fast Learner to help you level up faster with whatever you are trying to master. 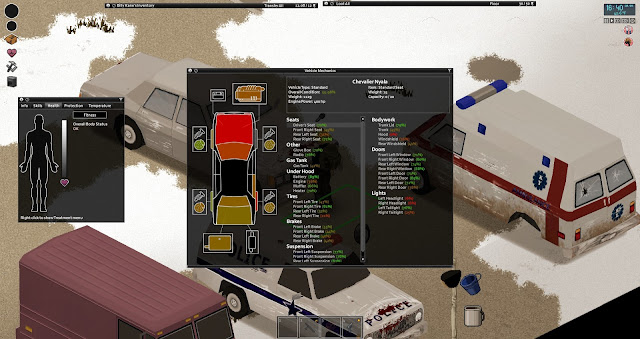 Mechanic Skill: You can repair cars or make it your own!

Choose Your Own Apocalypse 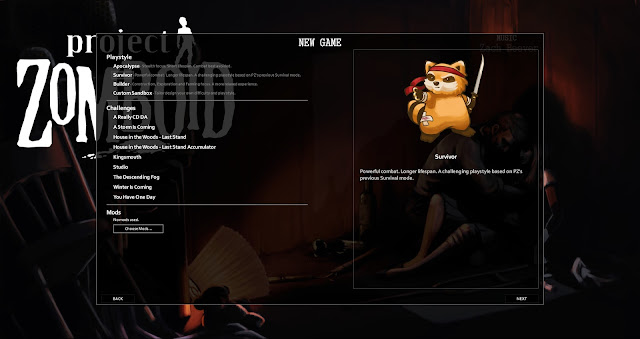 You can select from pre-generated settings like Apocalypse, Survivor and Builder. The 1st two does not expect you to survive more than a few days. A new player can go for maybe a month at best without dying due to the sheer difficulty.

Builder mode offers a more casual survival experience. This is my favorite mode right now. After getting the hang of things its possible to survive weeks and see your hard work bear fruit. I've been able to build a farm, a well-stocked safehouse, a collection of weapons, and hard-earned skills that I've leveled up through a lot of hard work. 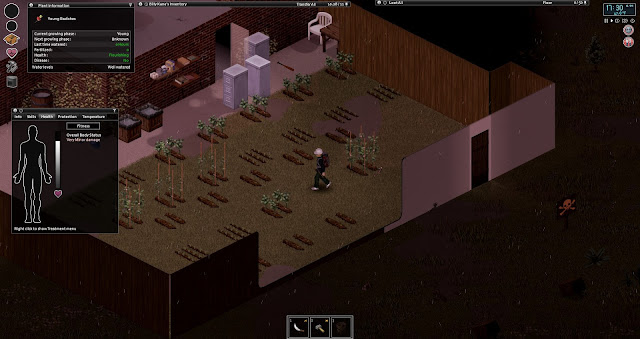 gotta harvest these before winter comes

The very best part about Project Zomboid is how customizable the everything is. You can make it as exciting as 28 Weeks Later with hordes of fast zombies, furious combat with all the guns you want and potentially a glorious death standing on a pile of brass. 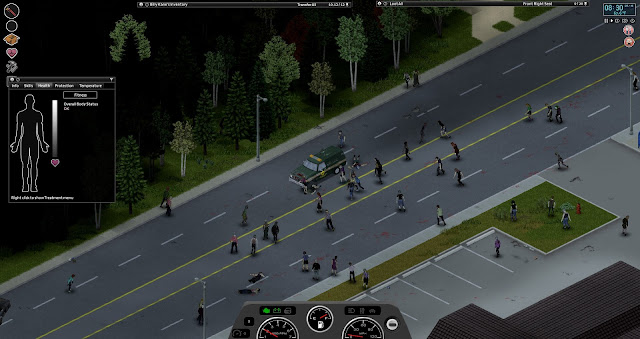 I have bitten off more than I could chew... 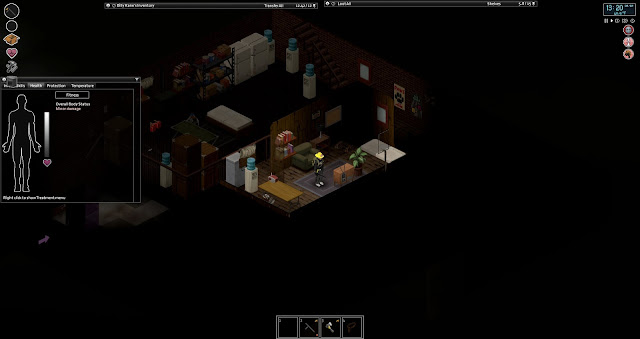 You can go for the slow burn where you're barely alive every day dodging the dozens of shambling dead in the neighborhood while you sneak around from house to house barely scraping by. In this setting, each day lived is a hard-earned win.

That and everything in between are possible.

"This is How You Died"

Project Zomboid is not really about winning in the traditional sense. The game is HARD, but mostly from our own choosing. To get the most out of the game is to enjoy your story.

You will die in the game pretty often. Its how we do so that matters. Its not necessarily mean that you've "lost".

When you kick the bucket, you may choose to spawn in the same save slot to have access to the same persistent world of the previous character and have access to all the crafted items, loot, and even the safehouse you built. All skills and XP are lost.

And there's also the matter of chasing down the person who became a zombie who's wearing all the cool stuff you lost. That alone could be a multi-day adventure worthy of the actual respawn.

Other playthroughs can also be ran alongside your "main" story just so you can satisfy whatever itch you've got at the moment. 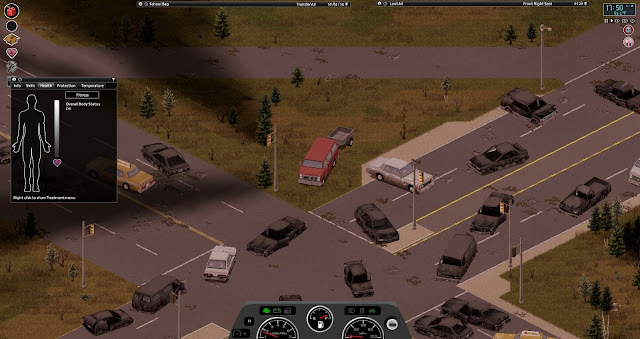 Using a third-person isometric view, you begin in a starting location with nothing but the clothes on your back. From here you will try to collect items to help you make it through the day. Houses and buildings are your main source of supplies.

Each building and container type like office or kitchen drawers spawn randomly the appropriate loot. Some are common, others can be rare. Practically everything is useful and if you want to play the crafter/looter, the world is your oyster. 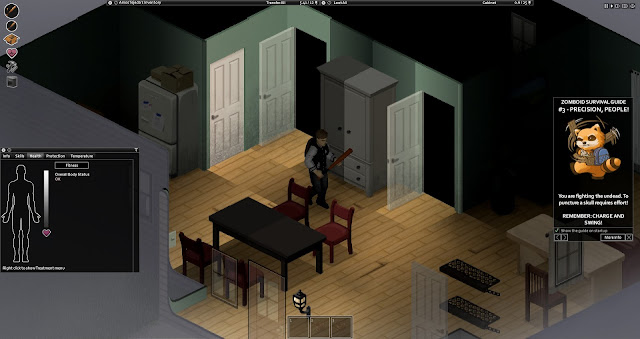 My name is Reggie Mantle, I am the last motor-mouth on Earth...

Project Zomboid is a semi-sandbox experience where you spawn in one of four pre-generated cities on a giant map. You can access anything here. All homes and buildings have fleshed out interiors. Depending on the location,

The game is the most comprehensive zombie apocalypse survival game I've played in decades. I am thoroughly enjoying all of the little details. There's so much to learn despite my nearly 300 hour experience and I'm happily scratching the surface! I haven't even crafted booby traps, makeshift weapons, herbal cures, and even the hundreds of well-made mods.

Project Zomboid has been around for 11 years and is getting better by the week.

For the price of just under $9 on Steam you just can't lose. Its got a free demo there too. I'm assuming its the vanilla experience which is quite primitive compared to Build 41 Beta. Its still tremendous fun.

Go check it out. Its the perfect zombie apocalypse survival simulator. Perfect because multiplayer support is coming soon and you could control bots with a mod or two. What more do you need? 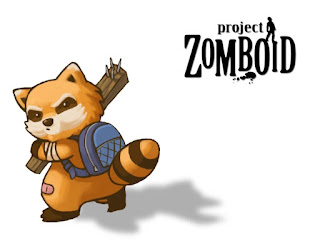 by The Zombie Hunter at 7:44 PM No comments:

Not trying to be a buzz-kill or anything but... 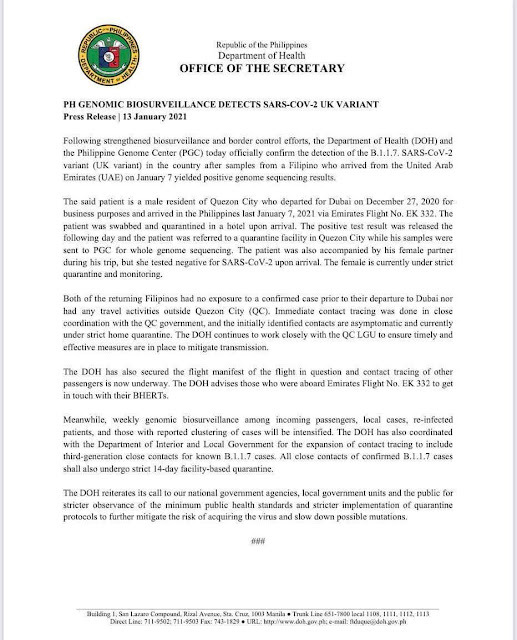 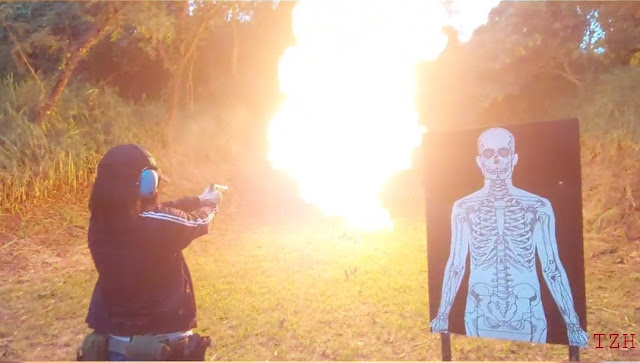 So 2020 came and finally went. I read a meme somewhere saying that the year felt like a decade rolled into one. That sure was a wild ride.

Do you remember those reports and whistleblowers from Wuhan that quickly got covered up? A year later and they're saying it didn't start there!

This crisis really struck close to home. We were lucky. Caution paid off but it was also a strain for my family physically and psychologically.

For some the worst had come to pass.

We lost more than a few friends. All of them would have been with us if it weren't for the pandemic.

Everything that could have gone wrong just did.

What did we learn?

How were we under duress?

Were our preparations tested?

I want to start this year with hope in our hearts. Our defiance will be built on all the precious lessons and the little wars won and lost in 2020. May they never be in vain.

I wish the unadulterated facts of this pandemic would come out and never fall victim to revisionism and propaganda.  That is far worse than a brain rotting zombie virus, don't you think?

Things arent as bleak as it seemed nearly a year ago.

This time there are vaccines. Our hospitals have caught up and beaten back the surge. We learned how the virus spreads.

I hope the holidays were kind to you. These days we don't say "bring it on 2021". Our wishes and resolutions are more grounded and humble now.

New normal? That's how we have been on this blog for the past 10 years.  I am only glad that people are truly on board now with this whole "movement".

Pick up your mitts and get back in the fight. 2021 should be payback for everything.

Just don't ever let your guard down.

The Zombie Hunter
I write about survival, my hobbies, home defense and disaster preparedness. I also like dogs and cats.