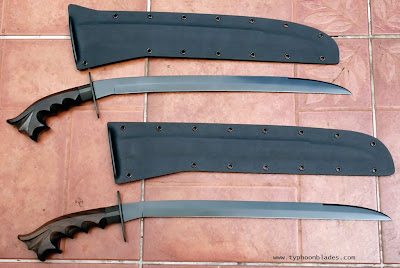 The Philippines has a rich heritage in the use of bladed weapons for warfare. This comes from the pre-colonial tribes from across our 7100 islands that is home to a myriad of swords, knives, and the martial arts utilizing them.  It is likely that when the zombie apocalypse reaches our shores, battles will be fought & won with traditional weapons long after the last gun has run out of ammo.
One that stands out for me is the Ginunting.  An updated version of it has been adopted as the official bladed weapon by the Philippine Marines who train in the art of Pikiti Terisa Kali.
the marines can handle terrorists and the living dead

Despite advances in technology, traditional fighting skills and weapons are in constant development to give our troops the edge in the modern battlefield.
Vital Stats
Blade Length: 18-19.5 inches
Overall Length: 25-27 inches
Material: high carbon steel blade

The Ginunting translates to "scissors" and it gets the job done in similar fashion.  This curved design grants superior mobility and balance while maintaining its durability.  Its overall length is best suited to close-quarters combat.

The weapon has its roots in the machete or "bolo" which is an ideal junglecraft tool.  I really admire how it gets its business done as a one-handed weapon. This frees up the other for tasks such as grappling, parrying, holding a flashlight, a pistol, or even another Ginunting.

My own blade was acquired to augment the home defense arsenal.  There's nothing like having something that doesn't need  ammunition.  When TSHTF back in WW2, my granddad left one of these with my grandma plus a trusty .45 for protection as they fought a guerrilla war.  Good enough for them means good enough for us.

Use Against Zombies
It is a cutting/slashing weapon designed to attack your enemy's limbs, neck, and body at high speed.  To destroy a zombie, it is best to cut their heads off.  The design of the blade enables a skilled practitioner to dispatch a large number of zombies in a short amount of time. Just be sure to avoid the severed heads and dispose of them carefully.

Warning: Do not attempt to destroy a zombie by striking at the skull. The weapon was not designed for this, and it will take more than a single blow.  Time is life. 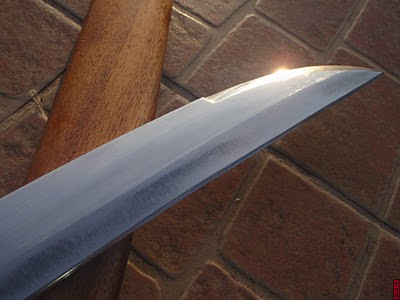 The revival of the Ginunting in the military is proof that centuries-old combat techniques are still relevant in the battlefield.  Be it terrorists or the living dead, these will do the job.
Stay vigilant!
by The Zombie Hunter at 9:05 PM