November 2012 UPDATE: The trailer's out. View it here.


A lot of buzz is going about the movie starring Brad Pitt as a United Nations employee who is trying to save the world from the zombie apocalypse.

The Battle of Yonkers


By now everybody knows that it will be deviating from the style of the novel. At first I was going to make a big rant of how all of our hopes & dreams for the film will be affected by the changes. I loved the book's style, how the author interviews key personalities some years after  the end of WWZ. Over the years, the  battle scenes, heroes, villains and geo-politics have grown on the book's legion of fans.

There are even indie videos on YouTube for some of the chapters. A lot of them are pretty well made.


I was on the verge of descending into pessimism until I read Sean Thomas Fisher's article. The gist was "take it easy". OK, I'll be cool. The nice folks posting their comments also convinced me to just let it go and look forward to the movie. Our movie. The one based on the book that got it started. Hey Brad, no pressure!

Who knows, maybe Pitt's story is the "unwritten chapter" or the 5th Beatle to the book. And I'm also sure that he film will still have the different struggles around the world.

That's the main thing. All of the chapters were done really well and showed a local's perspective of how they endured the crisis. I'll bet readers from India, China, South America, and Yonkers, NY enjoyed their respective situations the best.

So I guess we're still in for a treat. And armies of zed heads will be lining up like Star Wars fans to see it.

There, got it outta my chest. I'm cool now.

Stay vigilant!
by The Zombie Hunter at 1:06 PM 3 comments:

Got Featured on ITS ON RANDOM

I've recently been featured by Ms. Random Girl on her blog Its On Radom right here. Its part of her series of "get to know your bloggers". I just wanna say that she's got creative skills that I wish I could fill into the right side of my brain.
I wish I could draw, paint, make crafts & dolls, stimulate the minds of my offspring, because all of these WILL come in handy. Maximize your brains, yo.
Personally, I've always loved filling up questionnaires since I was little. Slambooks are fun, yes? 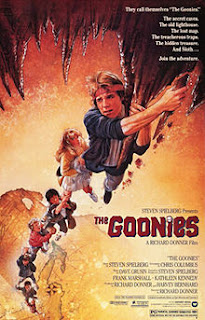 A favorite question was "What movie changed your life?", that was easy. The Goonies was the one that turned me from a skinny nerdy shy kid into a skinny nerdy ADVENTUROUS kid. Me, and my gang of BMX riding buddies. It helped shape me into what I am today.
If the zombie apocalypse happened in the mid 1980's, I think we would have handled it and saved all the kids in our school! And this sort of movie would totally rock.
Reading up on the featured bloggers just blew my mind. Darn it, them zombie writers do awesome stuff.
Thank you Random Girl!
Stay vigilant!
by The Zombie Hunter at 12:36 PM 3 comments: Links to this post

The Problem
A lot of survivalists have got it wrong. The zombie apocalypse won't be one big party where we rock & roll with guns on the living dead and party in our survival shacks for a couple weeks. Its gonna be way more serious than that.
People fail to see that we could be in for a long-term crisis. Years, maybe decades of fighting to survive! Many could not comprehend the collapse of civilization, much less the loss of modern amenities such as running water, electricity, health care, or the internet.
What's gonna happen is that many survivalist folks will do fine for the 1st few weeks, scrape by the later months, and turn into total cavemen before succumbing to the millions of infected brain-eating zeds.
Not if you're me.
The Solution
There's hope if you plan ahead, and it ain't hard. Start by making a Personal Survival List made up of important things that will be changed by living in an undead world.
Where do I begin?
Everybody will be affected in their own way. Think of essential stuff  that you'll lose access to or eventually run out of. Find ways to adapt and you'll improve your chances.
Examples
1. Medical
2. Food
3. Daily Living
There's way more.
I've done this a few years in advance and its helped my family gain a lot of confidence. We intend to do more than survive, we'll be doing it in style.
Stay vigilant!
by The Zombie Hunter at 3:42 AM No comments: Links to this post 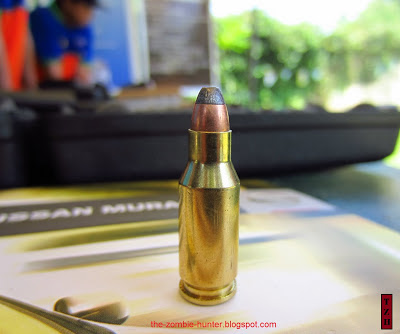 About two months ago at the Bolo Tuason Cup I was able to try out the new .22 TCM bullet developed by ARMSCOR.  The little thing is based on a necked down .223, travels at 2,100 fps and its JHP head weighs only 40 grains. That is a tremendous amount of velocity and performance from such a small cartridge. It is quite exciting to see where this will go in the world of personal defense.

The photo below is a nifty size comparison between the two most common pistol calibers. 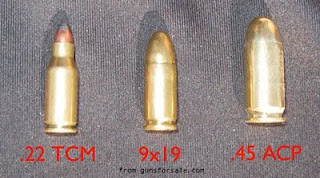 The birth of a new caliber and handgun:

The guys from Armscor were demonstrating the bullet with a prototype Rock Island Armory .22 TCM Pistol.  Its basically a double-stack magazine 1911 chambered for the new caliber.  This was definitely one of the early models judging from the low serial number.

While lining up for my turn, I was intimidated by the large muzzle blast coming from the gun. It was also really loud! I don't shy away from big stuff, but hearing it from a handgun gun was a new experience. I even flinched in anticipation before breaking my 1st shot. To my surprise, it had hardly any recoil despite the thunder from each trigger pull.

I love this fire-breathing pistol! There was hardly any kick, and placing 5 rapid-fire shots in the center of a target 10 meters away was really easy. This was a popular attraction at the Level Three IPSC Match and a lot of rounds went downrange. 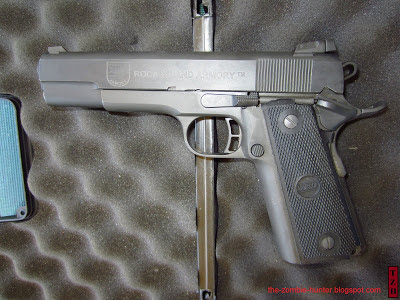 This is one of the prototypes. Check out the old "Rock Island Armory" logo, and the rough "Armscor" rubber grips.


I found another video showing what it could do to a watermelon. Those things are heavy. Sure they're soft, but blowing it up like that is proof of physics.

I wish we could see lot of ballistic testing for this caliber, particularly in its terminal performance as a defensive round as well as how it will fare over a long distance. Does it tumble when entering a target? Does it expand? How will it deal with layers of denim and bone? Will it smash through a car windshield? We need answers. Another key to success would be the availability of the ammunition. I'm sure the company is working on producing sustainable quantities for this breakthrough caliber as it looks like it was designed to make a significant mark on the industry.

What if they built a rifle or submachine gun chambered in this round? What about a polymer concealed-carry pistol? Can we have a drum magazine? The possibilities are endless!

VS Zombies?  Think of a gun that shoots light as a .22, could hit harder than a .45, and could carry twice the amount of ammo. Accurate head shots are definitely not a problem. I sure hope to see more developments for the .22 TCM!

UPDATE: I've got more info about this bullet's penetrating power over here.