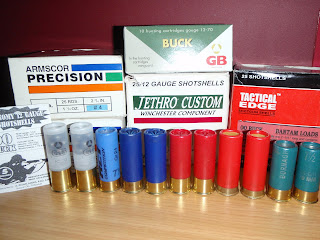 this picture makes me smile
I. What is Patterning?
There are all sorts of brands for shotgun ammo out there. It is important to remember that each individual shotgun will have a unique pattern or spread for these at various distances. Even if you & your wife have the same type of gun and ammo, it is likely that their patterns will be different!
The most common ammo type is the "00" buck, pronounced "double ought" buck. These are  2 & 3/4 inches & each of these contain 9 pellets. Since shotguns belch out these out of a smooth bore barrel, they don't travel in a straight line. This is important so you could choose the ammo with a pattern that will suit your lifestyle.

II. Shopping Spree
I purchased stuff that was available in major shopping malls or gun stores. Too bad I could not find any of those low-recoil Federal Premium shells, those are fantastic. My loot bag consisted of a box of 40 rounds from each of these goodies:
III. Testing Procedure
The ammunition were fired with my Benelli M3T at 5, 7, 10, & 15 meters on a single target board per brand.  After each shot, the holes are marked & encircled to indicate the spread since they get bigger the farther I go.
The goal is to help me find the ammo that will have a consistent pattern of pellets.  I'm also looking for stuff that's capable of cycling my weapon's semi-auto setting. My gun can do either pump action or semi-auto, but I prefer the latter so I can shoot faster.
Now lets get to the fun part! 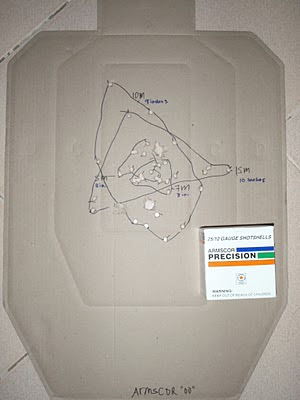 A "doughnut" shape developed as the target became more distant. This is a tendency for some ammo to make a shape similar to Homer Simpson's favorite snack. The pattern looked good because majority of the hits landed in the Alpha zone even at 15m. 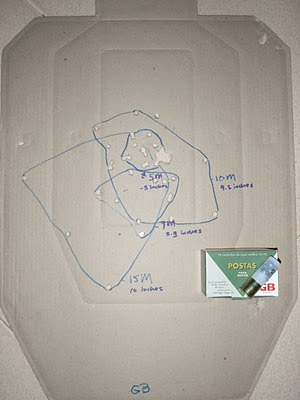 A lot of multi-gunners seem to favor this brand. This imported stuff cycled my semi-auto & kicks noticeably harder than the rest. The spread of the patterns had pretty much the same compared to Armscor's "00" buckshot, but I noticed that the last shot at 15 meters seemed to have drifted to the left side of the target paper. 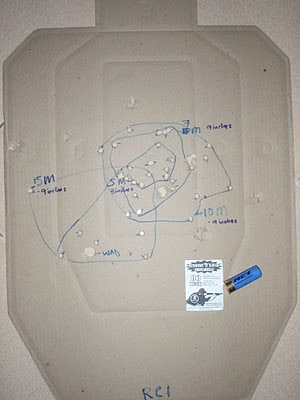 The label says that these are "economy" shells that are reloaded from once-fired shells. They're pretty cheap too. The patterns were very similar to the previous two, but the pellets mysteriously drifted to the lower left again the way GB's did. Bad news is that this could not cycle my semi-auto & I had to use pump action for each shot.  Good news is that the patterns seemed consistent and held a tight grouping. 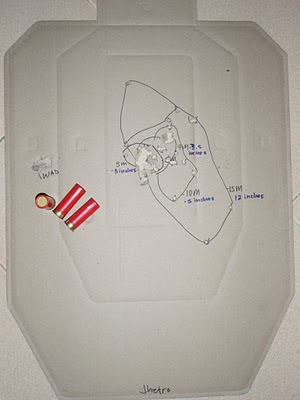 This cannot cycle my semi-auto.  Bummer.
Big surprise: this ammo had really tight patterns! The light recoil must be a contributor to this. At 10 meters, it had an amazingly close grouping of just 5 inches in diameter. That is a lot of stopping power focused on a very small area. Remember that each "00" pellet is equivalent to a .32 caliber bullet. A smallish pistol round, but devastating when 9 of these are flying at you with each blast. 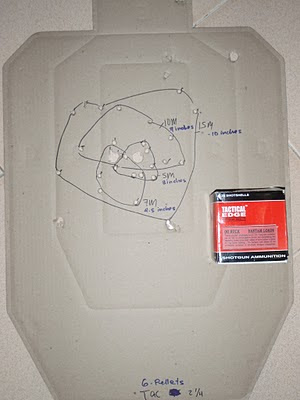 This ammo type is slightly smaller than the standard "00" buck and has 6 pellets instead of the usual 9.
I was pleased at how the groupings were comparable to the other brands. Take note that each shot made a ring or "doughnut" shaped pattern from 5 to 15 meters. 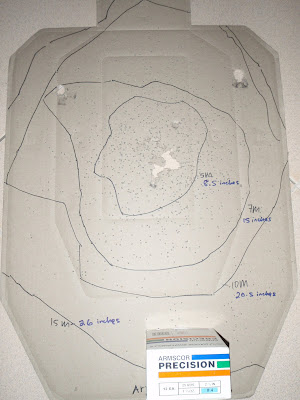 This was a lot of fun. This ammo is designed for shooting birds. Do not use this for defense because the tiny little pellets will just irritate your target & won't stop them from shooting back. Same banana with zombies. The pattern we made was entertaining to look at because of the insane amount of holes we made on the target paper. If you need new ways to feed your family in a prolonged crisis, this can help a lot.

V. Summary
As of this test I found that for my particular defense requirements, Armscor's "00" buck works best for me because the patterns held a consistent shape & had a small diameter from 5 to 15 meters. It also cycles my weapon's semi-auto mode. For pump-action only, I'm torn between using Jethro and the Tactical Edge bantam shells because of the tight patterns for the former and the additional round I could carry with the latter.

There are other types of ammo to try later on. I'm looking forward to testing the various magnum (3 inch) and single-slug rounds that I bought from the November 2010 Gun Show.
This is an opportunity for me to contribute to that debate about other buckshot types, especially with  "000" and "0" for our next installment of Shotgun Patterning.

Stay vigilant!
by The Zombie Hunter at 4:11 AM No comments: Links to this post

Jethro "The Jet" Dionisio won first place in the overall results for the standard division at the 2010 Jack Enrile Cup Philippine Nationals.  My shooting hero has done it again!  We all know that he's world famous for dominating the top world shooting events in the past two decades.
Other big names won the top positions for the various categories such as Enrico Papa for modified, Jeufro "Jag" Lejano for production division, and Raul Arambulo for the revolver category.  JJ Racaza took the #1 for the open division.  I've seen the guy on the History Channel on that really cool show called Top Shot.
I'd love to fight side by side with these guys.  I'll bet they'd be able to take down thousands of the undead all by themselves!
Yours truly placed somewhere on the bottom of page three out of six for the standard division rankings.  I did pretty okay and promise to do better next time. Not for glory, but for my loved ones.
*****
The Zombie Hunter prefers the standard division because it allows only a few modifications for your weapon.  Production and Revolver are pretty cool too, but I just love the stuff I've done for my 1911.
When TSHTF, batteries will become scarce so your fancy red dot optics will not survive a prolonged crisis.  Don't forget that those tricked out race guns are also quite bulky!  I endorse training with iron sights so you can endure.  The same logic applies to your tacti-cool out assault rifles equipped with EOtech & Aimpoint sights.
Electronics will eventually fail.  Iron Sights are forever!
The Zombie Hunter also enjoys shooting those round steel plates w/c represent heads.  Those are the only worthwhile target when fighting the living dead.
*****
Here's stage 12 from the event plus how I dealt with the bad guys.  Read the notes to see it from The Zombie Hunter's perspective. 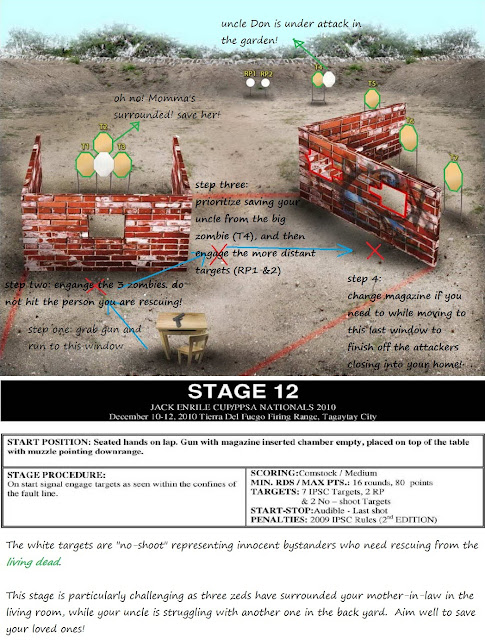 click the picture to zoom in
When competing, you gotta think of these stages as actual combat scenarios. Even if most of them use the usual IPSC target papers, you can pretend that they are zombies.  Even if they don't have "heads", the point is to plan your attack and eliminate the targets in the most efficient manner.
The most important element for all this is creating a dynamic training regimen. Being prepared for any situation is numero uno for the true survivalist, and practical shooting is an incredibly fun way to develop the skills and discipline to face the coming storm.
Check out the match details to find out more about the different stages.  It was a fantastic event and I made a lot of new friends!
by The Zombie Hunter at 11:29 PM 1 comment: Links to this post

Fight the Power: Save Wikileaks

The war for the control of information on the internet has reached new heights.  Wikileaks.org has been shut down by a U.S. provider, Amazon and Paypal have also withdrawn their services in an attempt to strangle the voice of freedom. 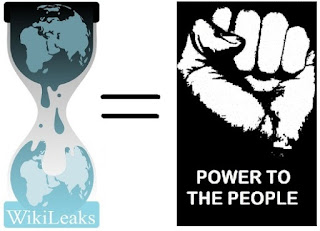 We all know that every government in the world will try to conceal any coming outbreak that could endanger the populace.  They will do this!  Perhaps to cover up their inadequate defense plans, to lull us into ignorance, to help them save THEIR skin at the expense of YOUR FAMILY. 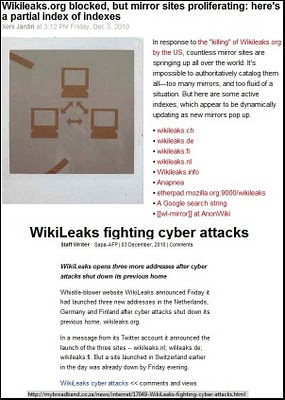 There is hope.
Countless supporters of free journalism & transparency have joined hands to keep the site running.  Mirror sites have also been set up to stay ahead of the agents of the Thought Police.  Donations are still coming in, and every centavo matters.
Just like the undead, they also plan to attack our brains by limiting the flow of life-saving knowledge!
Wikileaks could be one of the few remaining sources that could warn us.  Do your part to help you stay informed so you will never get caught unprepared WTSHTF!

Add your voice to the thousands of journalists and freedom fighters.  Got Facebook or Twitter?  Spread the word before its too late.
"Beware of he who would deny you access to information, for in his heart he dreams himself your master. "
- Pravin Lal
by The Zombie Hunter at 2:30 AM No comments: Links to this post