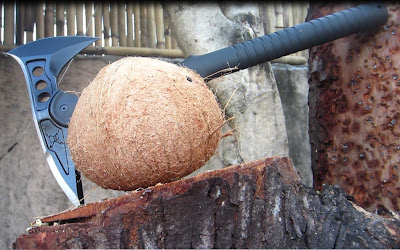 I've had my Gamo Silent Stalker Whisper air rifle for nearly a year now with over a thousand rounds shot through it. With the Gamo Pro Magnum pellet I can group under 2 inches at 26 meters (or 28 yards) from the standing position. I'm a happy guy.

This break-barrel air rifle is using a new IGT gas piston system that does not have the recoil and sensitivity that spring systems have. Unlike other airguns, it does not need to refill by a hand pump or CO2 tank.

This thing is no toy, it could shoot 7.8 grain .177 caliber pellets at an average of 970 feet per second. Ammo is cheap and lightweight, and you can use this to hunt small game and train your family very affordably. The sound moderator or silencer on the rifle is also quiet enough to do all these without attracting unwanted attention.

This is an ideal survival tool, but can it kill zombies?

We will most likely employ this weapon from an elevation so I shot at the coconut from my balcony at approximately 40 degrees and then from ground level. 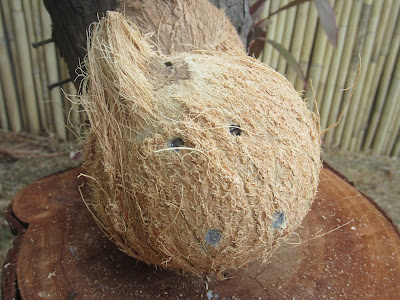 Coconut 1 was fired upon from my balcony from 28 yards away five times. You could see in the photo that there are 3 holes on top and then two hits below that did not penetrate. This shows that you can punch through the shell if you hit it squarely. 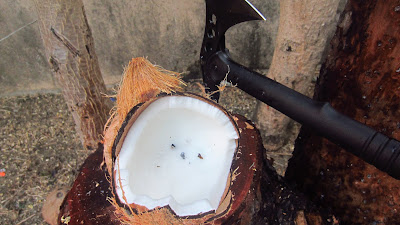 I cracked the coconut open with my United Cutlery M48 Tomahawk and was pleased to see three pellets inside. They were deformed flat and took out decent-sized chunks. 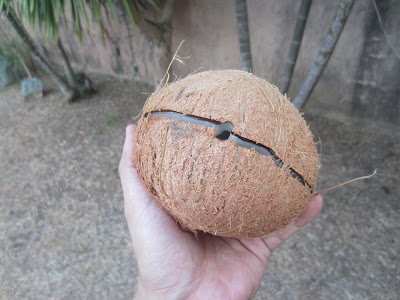 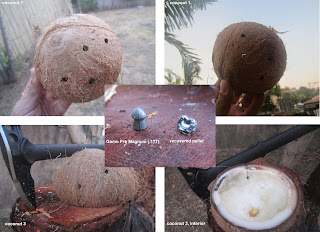 The second coconut was a lot more interesting. I must have landed my shot at a certain spot that caused it to split open. Crack! Coconut juice flowing out! Gnarly.

I don't expect to split a zombie skull like that, but the impact was quite convincing.

The third coconut was a larger sample and had already gone stale. The shell is nearly twice as thick as the others but the pellet also punched through.

Check out the video below, note that from 26 yards away you could barely hear the rifle, good to know that the silencer works.


I am very pleased to report that this air rifle chambered in .177 caliber pellets can punch through a coconut and do significant damage to the brain. With good aim, these are likely to penetrate a zombie's skull. I hope that destroying them would require less than two well-placed shots.
I'm limited to relatively short distances with this weapon, but I'm good enough to hit a zed's eyeball at around 30 yards. That would definitely take them out.

This weapon is now part of my survival gear. My family can practice marksmanship and hunt small critters. With 2000 pellets easily stored in my pants, a comfy chair, and a cold drink with me on top of my hidden post at my roof, I could whittle down zombies that come close to my fortification.


The white coconut meat was my rewarding afternoon snack. Tasty!

For my next round of tests I need to acquire a pig's skull for me to shoot at. Why a pig's skull? Because they can be readily obtained from our local butcher. These are thicker than human skulls but should prove to be a definitive penetration test.

May is Zombie Awareness Month

Pull out your gray ribbons folks, its time to remind our like-minded friends and family that May is Zombie Awareness Month.

This means we'll be seeing a lot more zombie-themed stuff on TV, the internet, zombie products, and other such things to capitalize on the occasion. Favorite topics on many other resources will cover how to kill them, what weapons are great to use, possible origins of the Solanum Virus, etc. 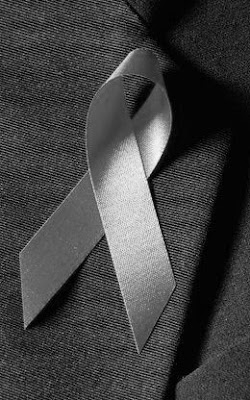 For The Zombie Hunter, Zombie Awareness Month is all about getting back to the basics.

Here are a few productive activities to work on for the next 30 days:

1. Finish your Bug Out Bag already.

2. Check your emergency supplies at home. Can your family really last more than three months? Medicine, food, water, ammunition, those are just the beginning.

3. Review your emergency map. Review it with your family. Where is your escape route, where are possible infested areas, how many backup shelters do you have?

It is entirely possible that they world will still be infested with the living dead long after our generation has gone.

6. And pay it forward! Share your knowledge with other survivalists! A "LAMOE" or Last Man On Earth will not win the zombie war.


Big thanks to the Zombie Research Society for the reminder. They're been an important resource for me over the years and you could visit the survival section of their forums. Cool stuff there.

Like ZRS always says: "What you don't know can eat you!"