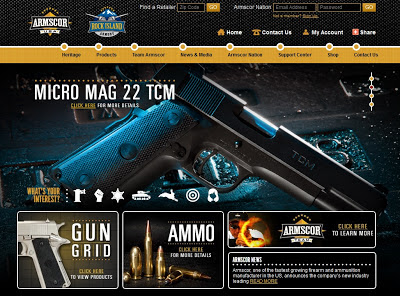 The wait is over! They've finally launched their new website. I've been waiting for them to get this done since the last gun show. With the torch passed to their new boss Martin Tuason, the future looks bright. I wish them success in all of their endeavors.

ARMSCOR USA manufactures its stuff in the USA. Where? Stevensville, Montana.

The make the most number of 1911 pistols worldwide. Great ones too, at a wonderful price.

They built the MIG 22 Target, a match-grade .22LR rifle that shoots like a dream.

There's a video section for all of their products too! How cool is that?

JJ Racaza, Eric Grauffel, Athena Lee and Jethro Dionisio shoot for Team Armscor. Who are they? Some of the very best shooters in the world!


Stay vigilant!
by The Zombie Hunter at 11:57 PM No comments:

Thank to all who have served, especially my granddad.

My family commemorates it in our own way. He fought alongside the American forces in WW2 (USAFFE), so it is also a special day for us. 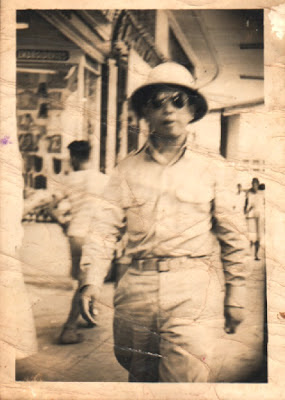 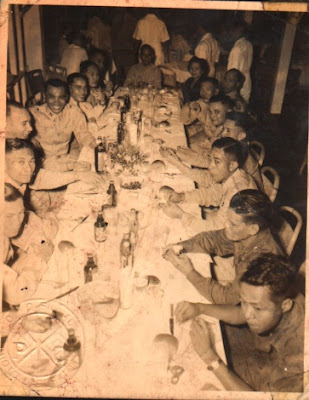 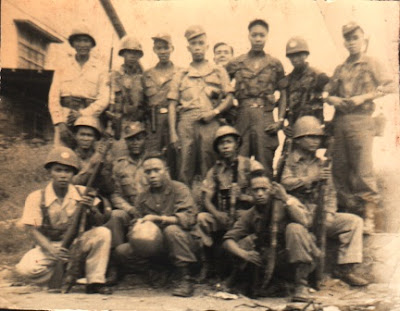 With his Scouts. Guy in the middle. When WW2 broke out, he was 35.
That is how old I am right now! 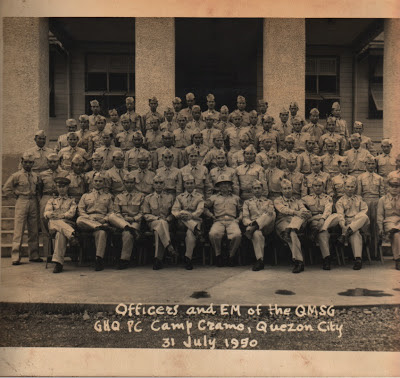 The Major, seated fancy in the middle. After the war. 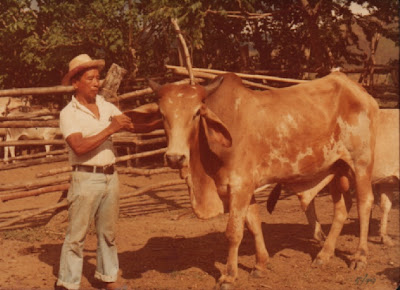 
Stay vigilant!
by The Zombie Hunter at 11:01 AM No comments:

So it finally happened. Max Brook's film has a trailer.

So this is it eh? The big kahuna that everybody's been waiting for.

Max Brooks, for better or worse, has come to remind everybody that it all started with that old book of his called World War Z.

The guys behind all other zombie movies, comic books, novels, and blogs from the past 9 years since this craze began are finally gonna see if their work measures up.


So on to the trailer. What have we seen so far?

2. a daddy Brad Pitt with family

3. film shown from handsome guy's POV, not the documentary form

5. the sh*t going down all over the world. this part I'm looking forward to

WTH is with Paramount Pictures? Fine! I just hope it won't suck.

I loved the book. I really did. It is a modern classic and a must-read before you die. Perhaps its too big to fit into one movie. If they'll ever make a TV series, they'd better stick to the original material.

OK, it looks like the film really deviates from all of our expectations. I won't throw a fit and will do my best to accept it as it is.

I guess some will argue that "daddy Brad" is not as good as "daddy Matt Damon".  See Contagion, chix dug him there. There was a zombie in that one too, its name was Gwyneth Paltrow.

My wife is gonna say "so this is what you've be bugging me all year to see huh?". Heck yeah. However I'll have her read the book first so we can debate which is better.


Cheers to you Mr. Brooks. You got us into this mess. And your dad, we love him too.

Stay vigilant!
by The Zombie Hunter at 1:28 AM No comments:


**********
I discovered an impressive lineup of airguns at the Willi Hahn Enterprises booth at the gun show earlier this year.

Three things about their new airguns grabbed my attention:
After a lot of research I came back and bought my first break-action air rifle. Its been an interesting 3 months in the making. 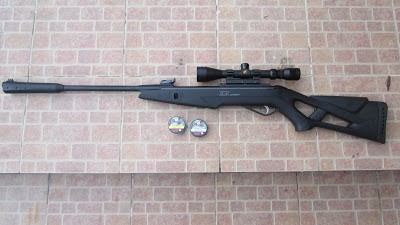 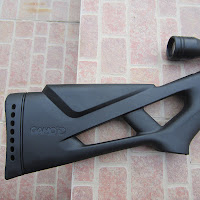 II. General Impressions
The gun is sturdily built and looks fantastic. I love the texture of the rifle and its contours. The stock has a openings that enables a light but solid grip. These also reduce its overall weight, and its easy to carry around.

The moving parts of the cocking mechanism does not wobble. The barrel is jacketed with polymer so it won't rust.

The cocking mechanism is very smooth and feels lighter than the published 30 pound effort when you get the technique right. 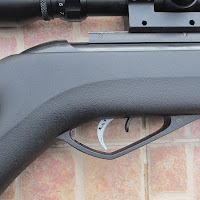 III. Smooth Action Trigger
The "SAT" can be adjusted to make it lighter. I've read that this has made significant improvements compared to previous models.

You can "stage" the trigger it near the end as it travels a small distance as you squeeze it, and then it gives just enough resistance before it breaks. I did not have difficulty getting used to this mechanism.


IV. Not So Silencer 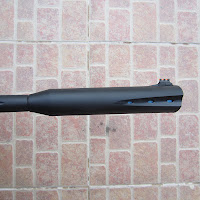 The ND52 noise moderator thingamajig reduces sound "by nearly 50%". It actually is a lot quieter than the unsilenced airguns that I used to own.

Thing is, they are not as quiet as those high-end PCP airguns which really are stealthy. I can shoot those without waking anybody up! I was hoping that this air rifle would have similar performance but they are still loud for indoor shooting.

The good news is that the sound moderator becomes far more effective outdoors. I am happy to say that it then becomes quiet enough for me to practice at my back yard without irritating my neighbors. Outside it sounds like someone firmly closed an aluminum sliding door. It is important to note that most of the noise from this gun comes from the gas piston, not the muzzle.


V. Sights & The Scope Mount Debacle
The fiber-optics on the front and rear sights are very good. The front is orange while the rear are "Luke Skywalker" green. My only problem is that I need to crank the rear sights as high as possible to shoot properly. 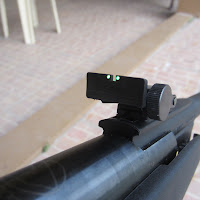 The basic scope that came with the gun is a bit of a disappointment. I can only get a good focus at 4.5x even if its highest magnification is 9x. If you could get a scope with an adjustable objective, you'll be making the most out of this gun.

Due to the recoil being generated for the whole length of the rifle because of its compressed gas piston, the scope stop slowly destroys the restraining screw and damages the cheapo scope mount. It gets pushed backward until the screw is deformed.

As of this writing, GAMO seems to be unaware of this problem.
Probably because it is new in their lineup.

I had to visit Hahn's excellent gunsmith twice just so we could discover that using a scope mount of higher-quality steel and a screw made of harder material is needed to keep the thing from creeping backward after each shot. This was a frustrating problem before it was resolved.

Out of the dozens of reviews I've read on this gun on the internet, I've only read just two user comments that identify this problem. Those professional reviews were good, but they did not mention this issue.

All good now. No more problems. 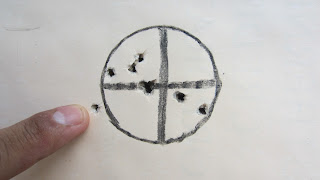 The gun is both powerful and accurate!

I've blasted pellets through a lot of fruits, water jugs, and various hard objects. I've even killed a large rat with a center-mass shot that was unlucky enough to wander into my back yard.

Mrs. Zombie Hunter was my excellent spotter that evening.


At 15 meters, the bullet hit its lower chest and then it went straight out its back. The impact was a "thump" as if I punched it with my fist. You know you hit good with that sound. It hobbled a few meters before expiring. I suppose a larger caliber would have dropped it cold with the same gut shot.


Tip: head shots for any target are the way to go. I've also seen a video of this taking down a fox with a well-placed head shot. This is not ideal with .177 caliber ammo because you cannot guarantee a humane kill. The video only shows that it can be done.

When I got the scope problem licked, I could land shots in 2 inch groups at around 25 yards away from the standing position. From a bench I could tighten it to under two inches at nearly 30 yards, ideal for eyeball shots on the walking dead. With a better scope I'm sure I can take it further.

Good news: Unlike spring-powered air guns, this not as hold-sensitive as other springer type break-barrel rifles. You still need to master the "artillery hold". but this is much more forgiving. You just need to make sure to not grip it too tightly and use the same technique all the time. 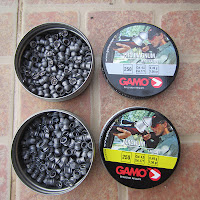 I've measured the speed of these two pellet types:

What I dig about air rifles is the wide selection of pellets for all kinds of applications, and there are just as many brands.

There are steel tipped armor-piercing pellets which let them punch through light sheet metal, hollow-point ammo for hunting, precision ammo for competitions, heavy field ammo for long-range shots, and a lot more.  Gamo's pellets have good reviews.  Click this link to check out their video that describes each one.


IX. At the Range 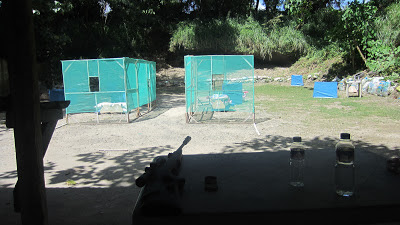 This is what a target looks like at 25 meters. Below is a photo of 4.5 times magnification. Gamo says that this is the gun's hunting distance sweet spot for hunting because penetration power decreases further away. 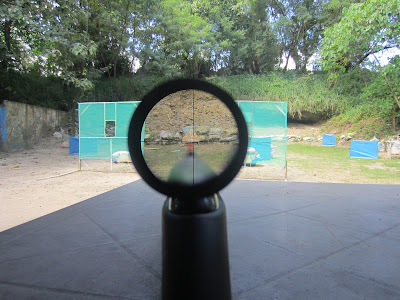 I have shot up to 50 meters and they still perform pretty well with good bullets. Quality stuff means having no defects and good aerodynamic properties. Take note that strong wind will greatly affect those tiny but potent 7.66 grain pellets.

Everything about this gun is great once you get a high quality scope and scope mount. Hours of fun and thousands of pellets await!


XI. Six reasons why this will help you survive the Zombie Apocalypse

If you are planning to visit London and are in need of zombie training, you could check out the Zombie Boot Camp Experience from Buyagift. 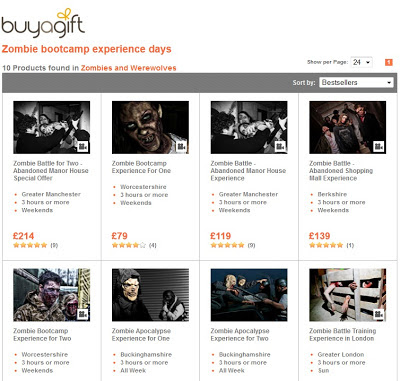 You can buy a gift for you or a friend to learn important things like team work, trigger discipline, and surviving the absolute chaos that can happen in a close-quarters zombie battle.

They've got this training scenario in a real decommissioned Cold War Nuclear Bunker! That is enough reason for me to check it out if I ever visit the UK.

Fighting hordes of undead requires specific tactics. The enemy moves differently, they have no fear. Against hundreds or even thousands of walkers, your shots will need to count.

The biggest thing that many survivalists forget is the importance of fighting as a team. We are guilty of thinking of only ourselves going up against the whole world. One lone ranger VS possibly BILLIONS of walkers? Brain-dead!

Training to fight with a team is for real survivalists. Turning your family into an effective fighting force is your first mission. This is why I dig this program from Buyagift. It looks like a lot of fun and I'll bet that they have a course that your wife and daughter will appreciate. From here, anything is possible.


Stay vigilant!
by The Zombie Hunter at 9:36 PM No comments: