Fellow Survivors, head on over to the World Health Organization's Disease Outbreak News section on their Global Alert & Response page.  Bookmark it right now. Check it & your other news sources on a daily basis.  This is an expansion of Survival Strategy #5. 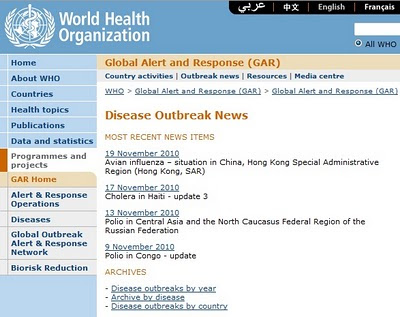 I wonder what's threatening my family this month?
Here you will find recent information on diseases that may come knocking on your door.  It also details the various actions you authorities are taking.  They're doing something, YOU need to take it further.
As we've discussed, go the extra mile when reviewing articles on these health hazards.  Keep tabs, but never leave it to the authorities to protect your family.
Vigilance, The Zombie Hunter's Way
Keep these in mind when reviewing your sources:
*****
As the report states, there is another round of Avian Influenza threatening the region.
Words too big?  Bird Flu!
Hong Kong is noteworthy because its a gateway to the whole world.  As you are reading this, health agencies everywhere are beefing up their defenses.  Even if the report was filed on November 17, this is already OLD NEWS and the virus has been spreading way before.  Infection waits for nobody.
What should we do?
Support your health organizations and agencies.  Learn everything about your enemy.  Your local community should benefit from your knowledge.  Find out what the authorities are planning to do so you will not be left out.  They will be deficient, so its your job to protect your home when things are going bad.
If there's a crisis in a far away country, try to share some of your blessings with the needy.  Haiti is in an ugly mess right now so we should do our part.  One less sick person is a step towards prevention!
On the home front, learn & share good hygienic practices with your loved ones.  Remind them what is out there so they're prepared.  It should be a team effort, you cannot do this alone.
by The Zombie Hunter at 12:56 AM No comments: Links to this post

I would like to share this article on the California Knife & Tool website regarding the many downsides of buying counterfeit or fake knives.
If you've been to flea markets like The Ruins at BF Homes in Paranaque, Greenhills Shopping Center, or the lower levels of the Makati Cinema Square, you'll encounter many shops selling knock-offs of popular knife brands such as Smith & Wesson and Columbia River.
Learn from my experience: these blades are proven to wiggle & eventually snap off during serious use.  Poor quality plus the bad karma for supporting piracy means the product will fail at the moment you need it most.

The moral lesson here is to stock up only with quality goods.  This applies to everything.  Your clothes, shoes, weapons, tools, bags...  All of these are essential to survival.

People forget that survival is also about ENDURING the crisis. It may take years & even decades for the world to recover from a global outbreak.  If you're serious about protecting your family, don't risk their lives on cheap stuff!


Make sure your gear is built to last, 'coz warranties are void WTSHTF.

by The Zombie Hunter at 1:30 AM 4 comments: Links to this post

The Firearms and Explosive Office of the Philippine National Police will be hosting the Battle of Gun Clubs 2010.  It is a LEVEL II event that will be held on December 2-5 at the ARMSCOR Firing Range at the city of Marikina.  This is the biggest shooting even of the year and I've been preparing for this tournament for some time.  I can't wait to see how I'll do at this year's standings!

ARMSCOR and their shooting ranges have training programs for safety and various levels of shooting proficiencies.  Gun Safety programs are for everybody at all skill levels, and even for those who do not own a firearm!  You can rent them at reasonable rates too.  Their instructors are the best in the industry so I highly recommend their services.
Apart from my usual training, I'll also be competing at this weekend's tournament at the 5th Philippine Military Academy Class of '66 Shooting Competition at November 20 at Camp Karingal, Quezon City.  Its a LEVEL I event so we are expecting a few stages for the event.   My target is to join a major tournament at least three times a year. That should keep me sharp. 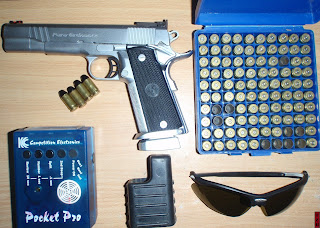 I'm looking forward to seeing my old shooter buddies and trade notes.  Perhaps I could convince them to think about preparedness in case TSHTF.
by The Zombie Hunter at 2:42 PM 2 comments: Links to this post

Fellow survivors, it is my honor to present the NMX04-1A.  It will be the first mecha prototype that could give us the edge in the coming Zombie Apocalypse! 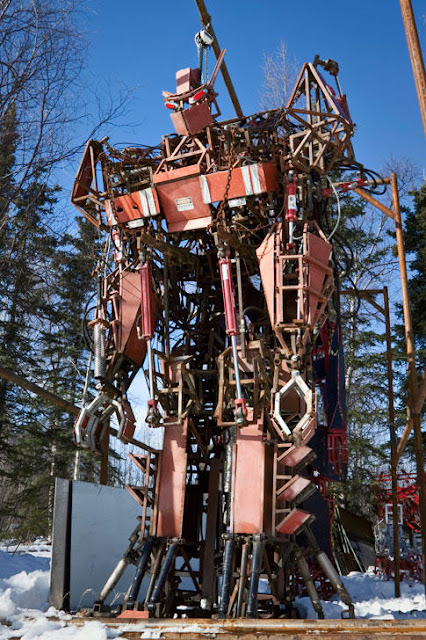 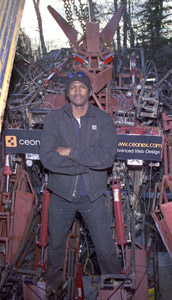 "Big Red" was Designed and created by Mr. Carlos Owens, the head of Neogentronyx.  A former US Army Heavy Equipment Mechanic, his company is presently developing mecha and  various  projects such as an advanced body armor, the NG-09 Skybike, and more.
Like many of us growing up, he's dreamed of piloting walking robots to save lives or defend the homeland against invaders.  Only this time, the threat he may fight against may come from within.
His main goal is to create a working prototype to prove its strengths in various real life applications.  Its not hard to imagine the many advantages the mecha platform will have for military, industrial, forestry, firefighting, space exploration, zombie killing, and other exciting fields. This should attract greater funding and interest for the advancement of the new mecha development industry.
Mr. Owens is a rare breed.  Its not often that we find creativity combined with real world skills and the drive to craft ideas into reality.  Many of us are merely content to dream big.  Mr. Owens & The Zombie Hunter are no such people.
His mecha is now in the late stages of development, and the results are promising.  Big Red is already capable of movement, its functioning hands can grasp various objects or dish out impressive crushing power.  Its controls are relatively simple: the pilot straps inside the machine's chest area and the machine can mimic basic human movements.
Advantages
Walking & moving like a human offers tremendous mission versatility compared to wheeled or tracked vehicles.  Having legs means you could travel nearly any terrain type, from rocky and snow-covered hills, shallow rivers, wooded areas, etc.  Its arms also let you manipulate your surroundings.  You don't need to drive around a fallen tree,  just pick it up!
And don't forget that the mecha can amplify your strength a hundred fold.  Crushing zeds with your metal hands will be be no sweat at all.
The biggest edge with a mecha is its cost efficiency when mass-produced.
You'd never guess it, but the mighty M1 Abrams is a grossly inefficient weapon for fighting the zombie war:
*****
Allow me to present my own Zombie Fighting Variant: the NMX04-1Z.
This is a specialized modification of the NMX04-1A that I have designed specifically for the efficient destruction of zombie hordes en masse.  I hope Mr. Owens would approve.
My proposed improvements would add capabilities that will make it superior to any fighting vehicle at a greatly reduced cost and maintenance.  All of the modifications rely on existing technologies. 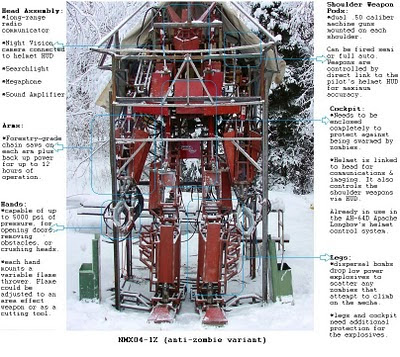 Overview:
In order to face the challenges of an all-out zombie war, armies need to re-evaluate and tailor their present arsenal for the coming threat.   On a mass-production level, the NMX04-1Z is designed to be a cheaper & more effective zombie-killing platform compared to traditional tanks & infantry fighting vehicles.
Capabilities:
The combination of lower production cost, anti-zombie armament, and superior mobility makes this an asset to any army that will face the undead.

*****
It is my dearest hope that governments & big industry takes note of this mecha prototype.  A single defense contract is all we need to gain the upper hand.


Got a friend or dad who works at Boeing, Caterpillar, Inc. or Detroit Arsenal? Spread the word!

by The Zombie Hunter at 7:10 PM No comments: Links to this post

Staying up at night because the zombie horde could crash into your home and eat everybody?    I sleep well because I did a Home Defense Analysis that turned my home into a castle.  Let me help you.

Start by going to Floorplanner.com, its an awesome resource.  Quickly make one for your home, then take a screen capture & print it out.  Do not share your plans with people you don't trust!  This information should not fall into the wrong hands.


For Part One, we will focus on the interior.

Identify these attributes:
1. Weak points that undead intruders will try to break down.  - Reinforce these right away.  Glass windows & screen doors are good enough for mosquitoes and burglars, but you need something strong enough for THREE zombies per square foot.  Iron bars are a popular choice.  DO NOT FORGET to seek advice from your significant other to make sure that your reinforcements are aesthetically sound.  Sturdiness is your department.
2. Defensible Areas - a place that has many advantages where it will be easy for you to hold off multiple attackers.  If they break in, you can make a stand here.  Stick to your goal of buying precious time for your family to either escape or destroy the intruders.
3. Places to Barricade and Reinforce - Even after reinforcing your weak points, you still need to know what will need to be boarded up.  Your storage inside your home should have wooden planks, nails, saws, and hammers so you could accomplish this in the shortest amount of time WTSHTF.


4. Emergency Exits - Every home needs more than one of these.  You need it mostly for Fire.  Against a zombie horde, you need these so your family would never be cornered & trapped.

5. Hidden Weapon Cache - When an emergency happens, you will need to secure your family.  Placing hidden & secure weapon safes in strategic locations will let you accomplish your main goal w/o wasting time.  This could come in handy in a hectic fight.  Remember the rules of gun safety!
I created an analysis using a floor plan similar to my home.  I determined what I needed to do and have thus achieved peace of mind. 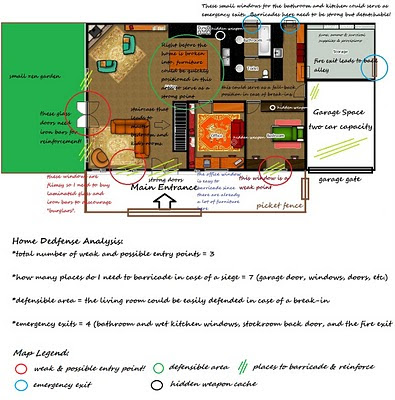 click to zoom
Your improvements to the home will protect your family & impress your woman.
A well-made Home Defense Analysis will keep burglars, the living dead, your daughter's suitors & similar pests away from your loved ones.


Now head on to this page for part two.

by The Zombie Hunter at 5:48 PM 2 comments: Links to this post